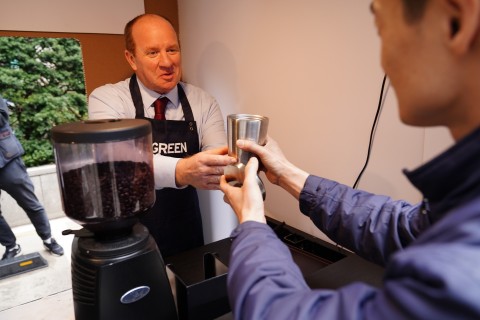 British Embassy Seoul hosted a coffee for zero plastic event to raise the awareness of the need for greater ambition to tackle the climate change ahead of the next UN Climate Summit (COP26) in Glasgow, Scotland in November. Mike Welch, Country Director for Department for International Trade, British Embassy Seoul serving the staff with coffee at Dohwa Engineering

SEOUL--(뉴스와이어) 2020년 02월 21일 -- British Embassy in Seoul hosted a coffee for zero plastic event at Dohwa Engineering, a total engineering consulting firm in Seoul. Free coffee was provided to staff at Dohwa if they brought their own mug or flask.

As the UK prepares to host the 2020 UN climate summit, COP 26 in Glasgow, Scotland in November this year, the Embassy is using its “Green is GREAT” campaign both to raise the awareness of the action being taken in the UK, but also to encourage greater global ambition and collaboration in order to save our planet.

The UK is committed to a legally binding goal for net zero carbon emissions by 2050. It is also leading the low carbon and renewable energy sector as it has recognised the major economic opportunity of the global shift to cleaner growth and the efficient use of low carbon technologies and resources.

Between 1990 and 2017, the UK reduced emissions by more than 40% while growing the economy by over two thirds - decarbonising its economy faster than any other G20 countries. It is expected that the low carbon economy in the UK will grow four times faster than the rest sectors of the economy out and deliver between £60 billion and £170 billion in exports by 2030.

The UK has the largest installed offshore wind capacity in the world, with over one third of the global capacity. Through the offshore Wind Sector Deal, published last year, the UK plans to deliver up to 30 gigawatts of offshore wind capacity by 2030. As a world leader in offshore wind, UK companies are already providing cutting edge support to the development of the industry all around the globe, including in South Korea.

Speaking at the event, Mike Welch, Country Director for Department for International Trade, British Embassy in Seoul said, “This is a critical year for our planet. A truly global effort is required from governments, businesses and each member of society. If we work together to develop and deploy clean technologies, we can accelerate innovation, increase economies of scale, and bring down the cost more quickly. I am grateful to Dohwa Engineering for supporting today’s event and looking forward to celebrating even more collaboration between them and UK companies in the future.”

About the Department for International Trade, British Embassy Seoul

The Department for International Trade (DIT) of the UK has overall responsibility for promoting UK trade across the world and attracting foreign investment to UK economy. We are a specialised government body with responsibility for negotiating international trade policy, supporting business as well as delivering an outward-looking trade diplomacy strategy. 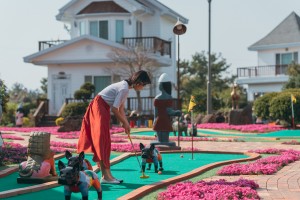